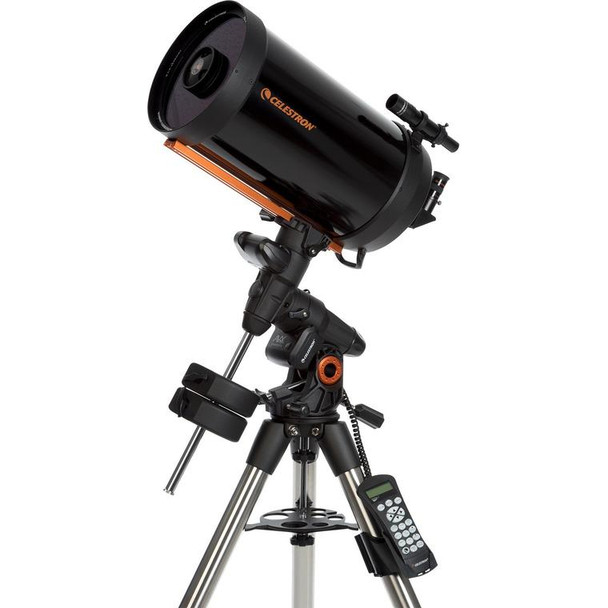 The Advanced VX (AVX) sets a standard in mid-level telescopes, providing many of the features found on Celestron’s most sophisticated German equatorial mounts at an extremely affordable price. The Advanced VX 9.25” Schmidt Cassegrain telescope is ideal for imagers and visual observers. The 9.25” optical tube offers 33% more light gathering ability than an 8” telescope. The Schmidt-Cassegrain design also eliminates chromatic aberration, making it a good choice for entry-level astroimaging. Each individual piece of this telescope (optical tube, tripod, etc.) does not exceed more than 20 lb making it easy for one person to transport and assemble.

If you’re an experienced imager, you’ll love taking this portable mount to a dark sky site and enjoying all the conveniences of a larger observatory mount. Or, if you’re new to imaging,  Advanced VX will help you get started with the hobby and keep up with your needs for years to come.

The Advanced VX is the smallest of Celestron’s German equatorial mounts. The computerized GoTo capability automatically tracks objects as they move across the night sky. The Advanced VX mount includes ports for a hand control, an autoguider, and 2 AUX ports for optional accessories.  The NexStar+ hand control gives you instant access to all the functions your mount has to offer. With automatic slewing and menu descriptions, any level of astronomer can master this mount in just a few observing sessions. The Advanced VX also has an impressive tripod for its class with a 2” diameter steel tripod legs providing an extra-wide stance for improved stability.

Dual saddle plate
As of early 2019, Advanced VX mounts include a dual saddle plate that accommodates both CG-5 and CGE-style dovetail. Switching between the two saddle plates is as simple as moving the hand knobs into a separate set of holes. You can use an Advanced VX mount with virtually any optical tube within its weight limit. Compatible with Vixen format dovetails 100mm or longer, not compatible with Losmandy D format plates (regardless of plate manufacturer).

All current Celestron computerized telescopes include Celestron PWI (CPWI), the most advanced astronomy software suite provided with any consumer-grade telescope. Celestron’s experts co-developed CPWI with the engineers at PlaneWave Instruments. The result is an all-in-one solution offering you many of the same features used on PlaneWave’s observatory-class telescopes.

For more information on CPWI and to see the user interface, click here.

Starry Night Software
Included with your purchase is a free download of Celestron’s Starry Night Special Edition Software. This advanced software by Simulation Curriculum offers detailed information about celestial objects and helps you plan your next observing or imaging session. The Special Edition software also allows you to control your telescope via computer.

MSRP:
Your price: On Sale: $2,936.00
Was:
Overview Explore the Universe and control your NexStar Evolution telescope with the free Celestron SkyPortal app for iOS and Android! Portable 9.25-inch Schmidt-Cassegrain...
CEL-12092

MSRP:
Your price: On Sale: $2,874.00
Was:
Celestron Advanced VX 8in EdgeHD Telescope The Mount: Compact and portable, the Celestron Advanced VX(AVX) German equatorial mounts offers the same rigidity as our larger mounts with minimal flexure...
CEL-12031

MSRP:
Your price: On Sale: $2,936.00
Was:
Overview Explore the Universe and control your NexStar Evolution telescope with the free Celestron SkyPortal app for iOS and Android! Portable 9.25-inch Schmidt-Cassegrain...
CEL-12092

MSRP:
Your price: On Sale: $2,249.00
Was:
Celestron NexStar Evolution 8in SCT Explore the Universe and control your NexStar Evolution telescope with the free Celestron SkyPortal app for iOS and Android! Compact, portable 8-inch...
CEL-12091